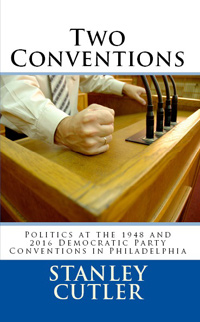 The printed record of the 1948 Democratic Convention in Philadelphia is like a snapshot, taken long ago, of a watering hole before it was turned into a shopping mall. The political environment has changed so much since then that, when the Democratic Party returns to Philadelphia in 2016, it will be hard to recognize any of the once familiar features. The transcript, 306 pages of 9-point type, is the record of an extinct form of democracy.
In 1948, less than a million TVs had been purchased nationwide. The set manufacturers saw the market as unlimited. Three of the four broadcast networks that televised the conventions were owned by television makers, including the soon-to-be-eaten DuMont Television Network. NBC(RCA) and CBS(General Electric) broadcast the conventions in order to promote the sets as household necessities. ABC did it because NBC and CBS were doing it.
Three generations of Americans have come of age since the 1948 Democratic Convention in Philadelphia. I was surprised, despite the passage of time, by the similarities between America’s concerns in 1948 and issues in the news 68 years later. As the Party was deciding whether or not to nominate Harry Truman, there was a dangerous war raging in the Middle East; Russia’s autocrat was bellicose and threatening in Central Europe; there was an immigration crisis over the fate of war refugees; and local police were brutalizing people in African American neighborhoods.
Life Magazine was the only commercial sponsor for the ‘48 Conventions. One of their executives, a visionary, invested in convention advertising believing a profitable return would be made in magazine (newsfeed) sales. And of course, the more magazines sold, the more Life could charge for advertising space. There were actually three Philadelphia Conventions in ’48: the Republican, the Democratic, and the Progressive Party’s that nominated Henry Wallace a week later. In total, Life paid $250,000 to sponsor all three.
Significantly, NBC allowed the magazine’s visionary to function as the executive producer of the Democratic Convention broadcast, establishing the televised news business as integral to and inseparable from the political process.
Television changed the environment. So did communications satellites, and computers, and the internet, and smart phones, and social media. With so many electronic media competing in our environment, it’s useful to think in terms of media ecology, much as environmentalists do when they wonder about the deer eating our ornamental shrubbery. The telegraph fed newspapers, then the telephone ate the telegraph, and the news business evolved to exploit the new opportunity. Sometimes we forget that it’s us, the people using the media, who are evolving as well.
The four-way relationship between money, media, the news business, and politics is symbiotic. It’s been a hugely successful evolution for the news business and the media companies, but the symbiosis has been disastrous for the environment – our politics. As with all ecologies, when something gets extremely large, there are negative consequences. Some things get eaten. Some things get trampled. Some things don’t get enough sun. The food gets scarce, and the big creatures, who need enormous sustenance, become more destructive.
Now, our environment is the State Primary system, a species of democracy that benefits the Media-Money-News behemoth even as it destroys the landscape. Democracy is all but dead. Government barely functions.
On the yellowed pages of the 1948 Convention transcript, in parentheses, we read, “(applause)”, “(booing)”, and “(cheering)”. Over three busy days, the Convention accomplished what now takes six months. Speakers were introduced to state their cases, to support the special interests of their States, to explain the consequences of past mistakes, to stir patriotism and party loyalty. The Chairman struck the gavel, demanded that the aisles be cleared, and conducted the whole affair according to the rules of the United States Congress.
These days, the never-ending media campaigns make it hard to distinguish between the advertisements for products and the advertisements for candidates. Nowadays, for months on end, messages about beer and smartphones are shown between messages about candidates. Inevitably, the images and sound bites urging one candidate over others can seem as inconsequential as the choice between gas stations on opposite sides of the street. The superficial equivalence has affected our judgment and our focus. The frequency, duration and repetition have reduced our level of interest. Flashing images and sound bites have replaced oratory, made us intolerant of messages that require more than a few minutes of attention.
The over-commercialization of campaigning also polarizes the electorate. Nothing attracts an audience like a good fight. Commercial television depicts every issue as a contest. Of course we think that it’s all about Republicans and Democrats – but dramatization is not the same as argumentation. Long, dramatized campaigns provide thousands of opportunities for profit, and thousands of chances for the inattentive to form the assumption that even terrible ideas have merit. The behemoth loves it and naturally opposes reform.
The 1948 watering hole is gone forever. Conventions were a flawed system, but they were better in almost every way than what we have now. Though imperfect, we must remember them for their brevity, intelligence, and effectiveness. As we reform our systems, as we adjust the media ecology to a healthier condition, let’s remember how it used to be.